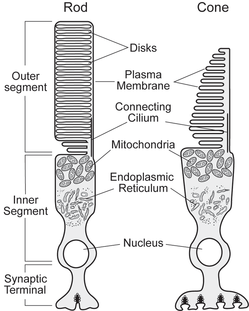 In vertebrates, there are typically two classes of photoreceptor cells, rods and cones. Rod photoreceptors operate in dim illumination conditions. Remarkably, rods can reliably detect single photons of light and generate an electrical response. In bright light, rods easily saturate and are unable to discriminate changes in light intensity. The photoresponse of rods is relatively slow, and the spatial distribution of rods throughout the retina limits the visual acuity.
Cone photoreceptors are well suited to bright light conditions, but are less responsive than rods to photons of light. An important property of cones is the fact that they never saturate, regardless of how bright the ambient light condition. Cone photoresponses are also much faster than rod light responses. The presence of multiple classes of cone cells, each with a distinctive spectral sensitivity, confers the ability of many animals to discriminate colors. The high density of cone photoreceptors in the central foveal region of the retina is responsible for the high level of visual acuity necessary for visual tasks such as reading.
Photoreceptor cells are highly specialized for light capture and signal transmission. The outer segment portion of the cell contains the visual pigment (which absorbs photons of light), as well as all of the necessary signaling components needed to generate the electrical response. The inner segment of the cell contains all of the organelles required for normal cellular metabolism. At the synaptic terminal, the electrical response generated in the outer segment is transformed into changes in neurotransmitter release. This results in communication of the light signal to neighboring retinal neurons, and, ultimately, in the perception of light.
Rods and cones differ in the organization of their outer segments. In rod outer segments, a stack of thousands of membranous disk membranes are physically distinct from the plasma membrane. Cone outer segments, in contrast, consist of continuous infoldings of the plasma membrane. The composition of the proteins responsible for the visual transduction pathway (e.g., opsin, G-protein, phosphodiesterase, etc.) in rods and cones are different: rod and cone phototransduction proteins are typically homologous, but not identical. These anatomical and biochemical differences underlie the dramatic differences in the electrophysiological responses of rod and cone photoreceptors to light stimulation.